I had a colleague tell me yesterday that some of her grad school classmates feel that their heritage language tracks are being threatened, because administrators are questioning whether or not they are learning anything by taking a language class in a language that they already speak.  We also commented how thankful we feel to not be in that place, and that we have a supportive administration.  Our program has shown growth over the last few years.

Before I answer that question directly, let me give you one tool that you can use in your response.  What does your school do with, let’s say, incoming freshmen who enter high school with an 11th grade reading level?  Do they eliminate the requirement to take the first two years of English or language arts?  They rarely do; they can still reap benefits and advance their language skills in their freshmen honors English class.  Likewise, heritage students who come through our doors may have proficiency in a certain language, but that doesn’t mean that we scratch their world language requirement, because there is always growth to be had on my fronts!

So, growth on many fronts.  Let’s answer the question now.

In two points, I believe that a heritage program is worthwhile if……

It is moving the students up the proficiency pyramid.

General (L2) world language programs start at the Novice level and (hopefully) produce Intermediate speakers.  Heritage programs will receive students somewhere in the Intermediate range and push them into the Advanced range, and probe them at the Superior level.  All high school students have gains to be had in proficiency in a non-English language, whether heritage or non-heritage students.  Sure, heritage students “already speak the language”, but I guarantee that 99.999% of them aren’t Advanced-High or Superior speakers.  There is always progress to be had, always floors to be added to the house, and always language skills to be acquired.

If you’re a Spanish teacher, look at a recent writing sample of a student of mine here at the beginning of the year. 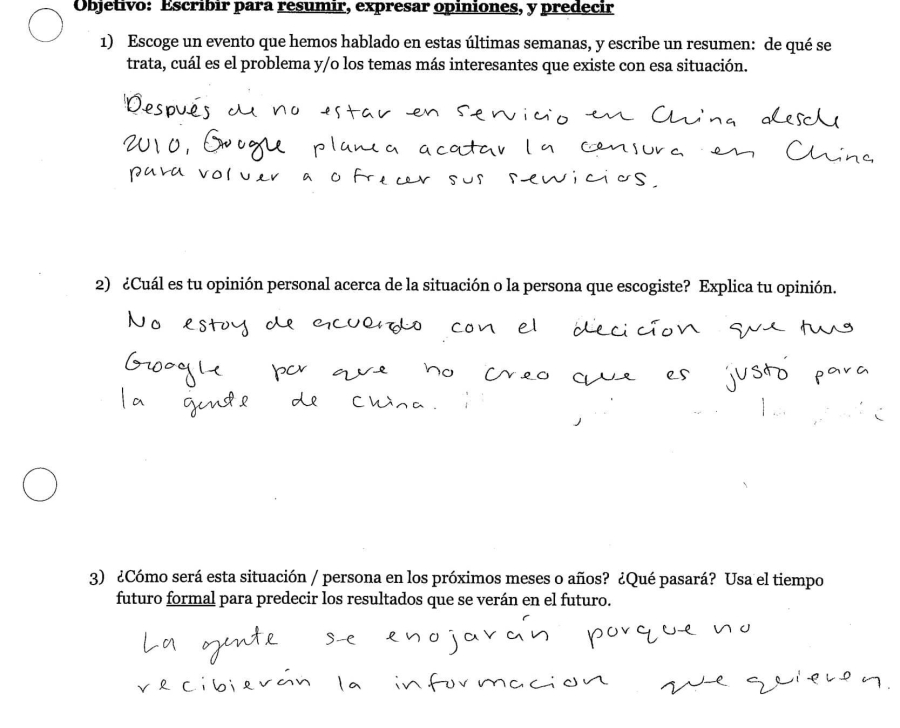 There are gender errors, spelling errors, and a general lack of breadth of response that I would not attribute to lack of interest (great student here!), but lack of confidence in fleshing out thoughts in Spanish.  Why would we pass up an opportunity to leave the Spanish of our students at this level and not build it and enrich it?

It is expanding the breadth of cultural knowledge of your students.

I dislike the idea of “testing out of a language” if the possibility of participation in (or creation of) a heritage program exists.  Language classes are – or at least should be – about much more than learning words and grammatical structures.  Those things are a means to an end- and we can actually accomplish that “end” in heritage classes!  A heritage program should expand the width and breadth of knowledge of culture, society, history, literature, current events, and arts of your heritage students.

Take José, a heritage student in 9th grade whose parents are from Mexico.

The answer to all the above is mostly “no”.  Heritage students could be pushed to take French or Mandarin to fulfill a language requirement – and that’s fantastic.  But let’s not believe that there isn’t plenty of room for expanding cultural, historical, social, and artistic horizons for our heritage students in their home language!  Let’s not scratch the language requirements for them.

I understand that school districts have to apportion their funds wisely and be careful to build sustainable programs.  But if you have a good number of heritage students who are interested in improving their language skills and expanding their cultural knowledge in their own home language, don’t add sections of Spanish 2 and 3.  Create separate classes for them to progress linguistically and culturally.